Some people profess a pity party is the best way to feel better when you’re down and almost out. Pity parties are about sitting with your friends and whining endlessly about your problems while you all eat ice cream or get drowned in the consoling ocean of alcohol. Depending on what your poison for the party is, you are expected to feel better at the end of it, and probably forge a way forward on the issue at hand. But it doesn’t always work that way. Sometimes, after a pity party, all you get is an inch or more around your waistline or a terrible hangover you can’t cure for hours!

Many people, especially females love to indulge in pity parties. The thought of having someone to cry with is a form of consolation on its own. And the fact that their friends can also share some harrowing tales that are worse than what they are going through makes them feel the stars are in alignment, and things are not as bad as they thought. It’s all well and good to have the support of friends and family in the form of a pity party, but really, you need to understand not everyone likes a pity party.

Personally, I find pity parties to be more of a rewind and replay situation, much more than a way forward. I hate the strain of whining about my problems because there’s a voice in my head that say “Yeah,.. keep whining. Let’s see where it gets you”. I see no reason why I should invite my buddies over to cry on my behalf when I could be asking them to strategize on a way forward with me, and I have nothing against ice cream and wine (I could live on them forever), but I don’t think the tear-flavored ones are that great, so I’d rather not indulge. Yes, I know it’s weird to have a female who doesn’t invite people for the sole purpose of crying and whining when life’s battles are tough, but crying gives me a headache, and well, I’m just not fluent in ‘whinese‘. Any pity party I attempt to throw will end up being the worst ever. Be prepared to be intellectually stimulated in the face of overwhelming sadness, and be sure to come with your analytical caps, because all night, we will be solving all the issues while we munch on carrots and apples. Yeah, you probably don’t want to be a part of that, which is why many people like me withdraw when they have problems. 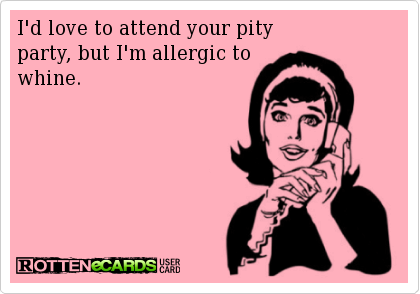 Not everyone likes a pity party, hence some withdraw to fight their demons alone. Try to understand if you are a fan of pity parties that it is nothing personal when people withdraw from you during their battles. They may withdraw from you, and snuggle up to other people like them who would rather wear thinking caps than weep into tubs of Haagen Dazs. Like I said earlier, not everyone would find the tear-flavored ones appealing to the taste buds. Instead of whining about their withdrawal, aim to understand the battle, give the necessary space, and when you can, give the much-needed upliftment. They will be back to being your best buddy in no time. They just like to keep their head down when the tides are high. XOXO

Do share your thoughts. Are pity parties of any help to you? Do you feel better or worse afterwards? or do you find yourself in the same place you were before the party? Please join the BBM channel for covenant relationships on C0027CE66 to have access to my posts on other blogs and interact with other readers! Have a fab weekend!

2 thoughts on “Not Everyone Likes a Pity Party” 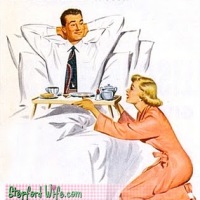